Posted in Football, Seattle, Sports, Uncategorized, What's Up With Maria, on 26 September 2012, by Maria Stefanopoulos, 11 Comments

As I said in my last post, there is so much to do and see in Seattle, Washington!  Day 2, Sunday, was a bit more sedate. We knew the downtown area would be crazy with Seahawks and Cowboys fans, so we decided to take the ferry and head over to Bainbridge Island. (Unfortunately, my sister isn’t a sports fan.) While waiting for our ferry, we saw a number of Seahawks fans disembarking the one that had just arrived. 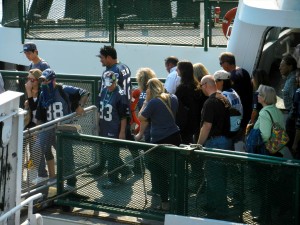 The ferry to Baingridge Island was a short 35 minute ride and very inexpensive. Luckily the weather was gorgeous and the views of the Seattle skyline and the port area of the island were incredible. Bainbridge Island has a quaint downtown with a number of restaurants and specialty shops. 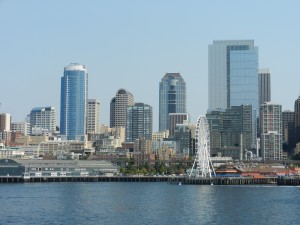 One of our favorites was the Mora Iced Creamery. With over 30 flavors to choose from it wasn’t easy to choose what we wanted. We settled on Raspberry Cheesecake and Italian Chocolate…definite winners! If we could have done one thing differently, it would have been to either rent a bike or have a car to see more of the island. 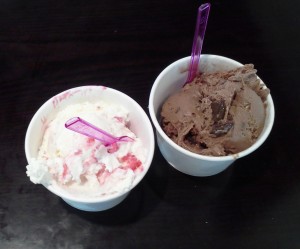 That evening we did the Bill Speidel’s  Underground  Underworld Tour. What is it, you ask? It’s exactly what it sounds like, a tour on the seedier side of Seattle’s history (sex, drugs, and debauchery:  the Red Light district). The Underground Tour itself showcases the physical history of the city and explains how Seattle was created on mud flats, therefore flooding with high tide and no place to run sewer pipes. Origianlly, the pipes were run along the streets, and during high tide, if you flushed the toilet, you got more than you bargained for. To fix that, the powers that be filled in the first level, making the second floor the new first floor. The Underworld Tour just makes it more interesting.

Bill Speidel wrote the book  The Sons of Profit on which the tours are based. His book, however, was banned by the school district, as they don’t  want the students to know of their city’s seedy beginnings. 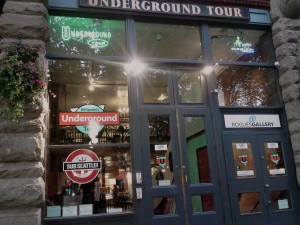 Ever wonder where the term Skid Row came from? Take the Underground tour and find out.

Contact Ingenious Travel today to book your trip to Seattle!