Like with any other big city, there is so much to do and see in Seattle, Washington, also known as the Emerald City.  My sister and I have wanted to visit the Pacific Northwest for quite some time, Seattle especially, and were finally able to do so! Why Seattle? It’s the home of many great musical acts (Nirvana, Pearl Jam, and Alice in Chains) and writers (Richelle Mead and Yasmine Galenorn).

Most of Day 1 was spent in the area known as Seattle Center, which is home to the Space Needle, the Pacific Science Center, the Experience Music Project and many other attractions. With only so much time in the day, we focused on the these three:

The Space Needle was constructed to be the main attraction at the 1962 World’s Fair. (Americans who attended witnessed the debut of white chocolate, touch-tone phones and microwave ovens. It’s also where Belgian Waffles were first introduced to the American public.) Today, the Space Needle receives more than 500 visitors a day. It’s only a short 45 second elevator ride up the 520 feet to visit the observation deck for some spectacular views of the city. A definite must do! Avoid going mid-day if you can, the Space Needle is busiest between 11am and 5pm. 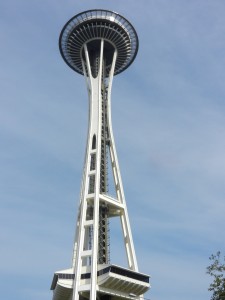 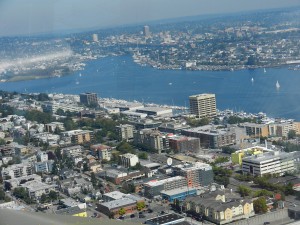 View of Lake Union from the Space Needle

Talk about a unique museum! The EMP Museum is another interactive experience created by Paul Allen, Co-Founder of Microsoft, as a tribute to his favorite rocker and Seattle native, Jimi Hendrix. (What do you think of the building’s exterior?) While visiting, try your hand at the guitar, drums and mixing boards. You can even record yourself singing karaoke. Tour the galleries and listen to the audio guides as they provide insights about artists and their artifacts. The EMP also houses Icons of Science Fiction. As part of this display, you’ll see Captain Kirk’s captain’s chair from the original Star Trek and a whole lot of Tribbles. You’ll also find artifacts from other classics like Darth Vader’s Light Saber and the gun from Men in Black. Oh, for you Sci-Fi/Fantasy fans, the Fantasy exhibit will be opening in early 2013, which will showcase world building and map making, including tidbits from literature, film, TV and comic books. 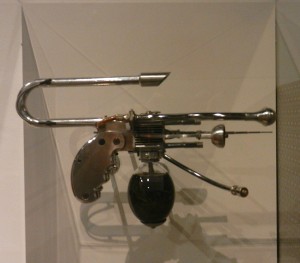 At the Pacific Science Center, everything is hands-on and for kids of all ages. There are a number of exhibits to experience. For example, you can press buttons, pull levers, touch animals, and watch laser light shows set to the music of Lady Gaga, The Beatles, Michael Jackson and Led Zeppelin. For those who prefer something a little calmer, the Pacific Science Center also hosts two IMAX theaters where patrons can watch documentaries as well as other current and not so current movies (Dark Knight, Indiana Jones movies, and The Hobbit). My favorite part, however, was the Tropical Butterfly House. Talk about amazing! And if you have the chance to visit before January 6, 2013, be sure to attend the King Tut exhibit. 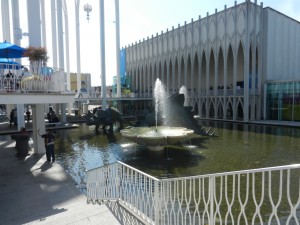 Grounds of the Pacific Science Center 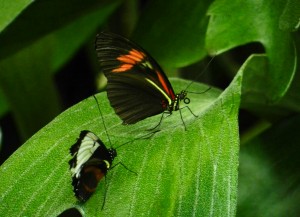 Inside the Tropical Butterfly House

The Seattle Center spans 74 acres and hosts over 12 million visitors a year. There are so many things to do and see, one could easily spend an entire day there. See more of our pictures from Day 1 on Pinterest. Let Ingenious Travel help you plan your trip to the Emerald City.