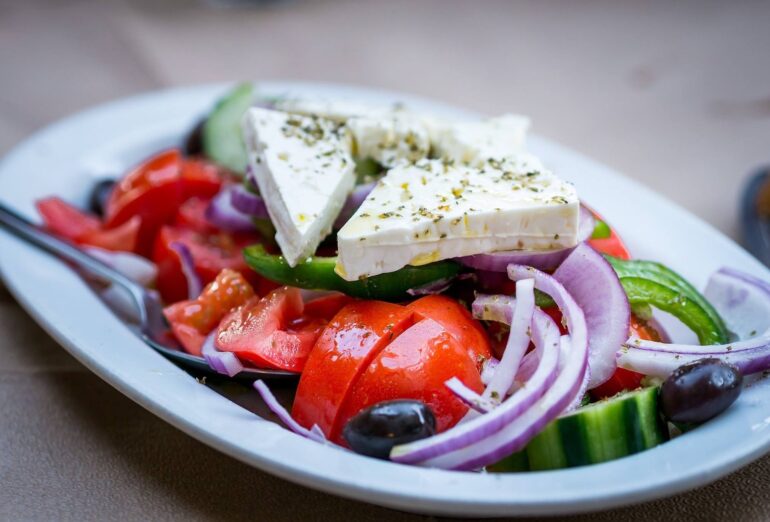 There is much more to Greek cuisine than Greek salad. On the streets of Athens, souvlaki is a popular fast food of skewered pork with tzatziki, lettuce and tomato in a pita. In Crete, locally grown snails sautéed in olive oil and garlic are a popular entrée. Don’t forget the holy trinity of Greek spirits: ouzo, tsipouro, and mastic!

While you’re in Greece, here are a few things to be sure to try. 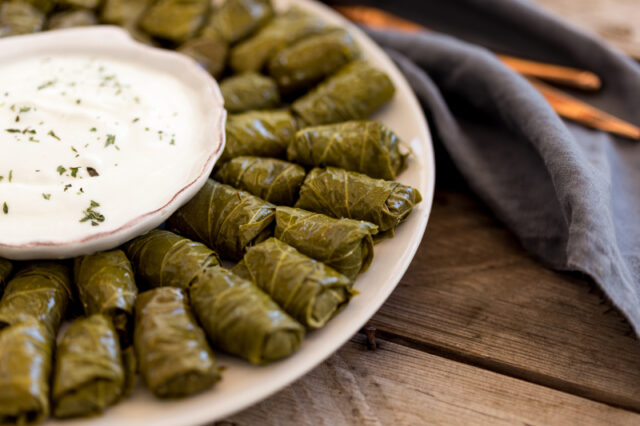 This iconic Greek food should at least be a part of one meal while in Greece. Dolmadakia (dol-mah-thah-kya) are grape leaves stuffed with a mix of ground meat, like lamb or beef, rice, pine nuts, and fresh herbs. Indulge in these perfectly wrapped parcels with a lemon wedge as a side or appetizer. This flavorful finger-food snack is sure to please. 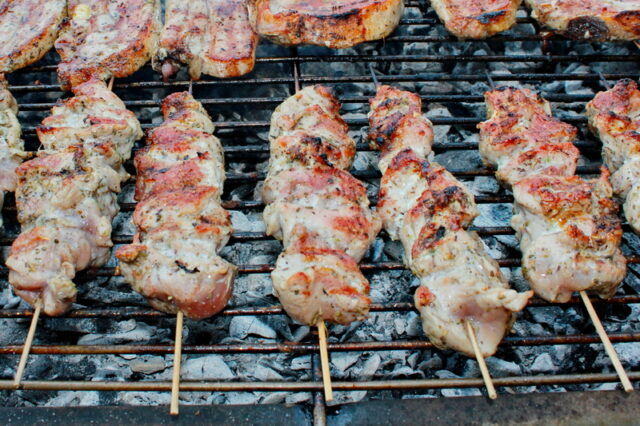 Simply meaning “meat on a skewer,” souvlaki is a popular street food all over Greece. Souvlaki is often mistaken for a gyro because it’s also wrapped in pita, but souvlaki is usually distinguished by the type of meat used. Usually, it is simply pork meat on a skewer, but sometimes the skewer is packed into a pita alongside potato chips, tzatziki sauce, tomatoes, and onions. 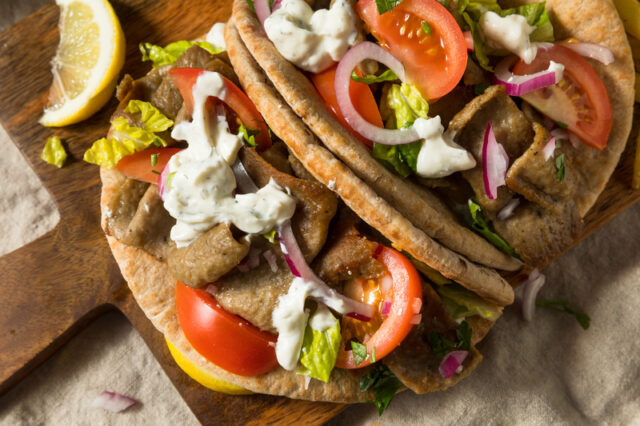 It’s hard to miss a gyro street vendor – just look for the massive upright spit turning with tons of layers of meat on it. Be sure to try a gyro and watch as they slice the meat off the spit right in front of you. Opt for all the toppings and stuff your pita with sauces, onions, lettuce, tomatoes, and potato chips. It’s a delicious street food and can be enjoyed on the go. 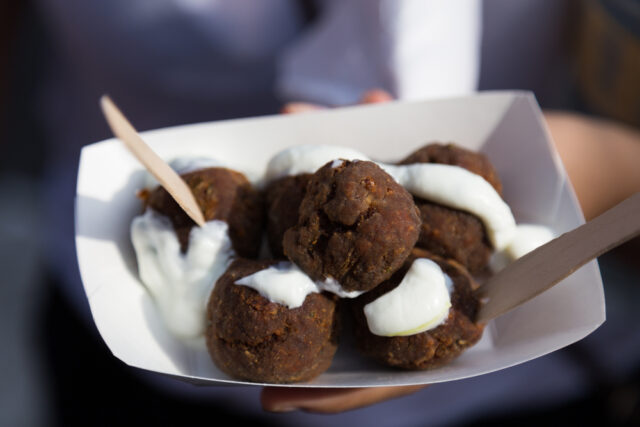 Sure, meatballs have Italian influences in most people’s minds, but the Greeks bring a delicious twist to them. Juicy and crispy on the outside, Greek meatballs are usually served up with creamy sauce and pita bread, but can also be enjoyed with basmati rice and a Greek salad. The meatballs are seasoned with a myriad of herbs, but the main difference is the inclusion of spearmint. They’re best washed down with a glass of ouzo. 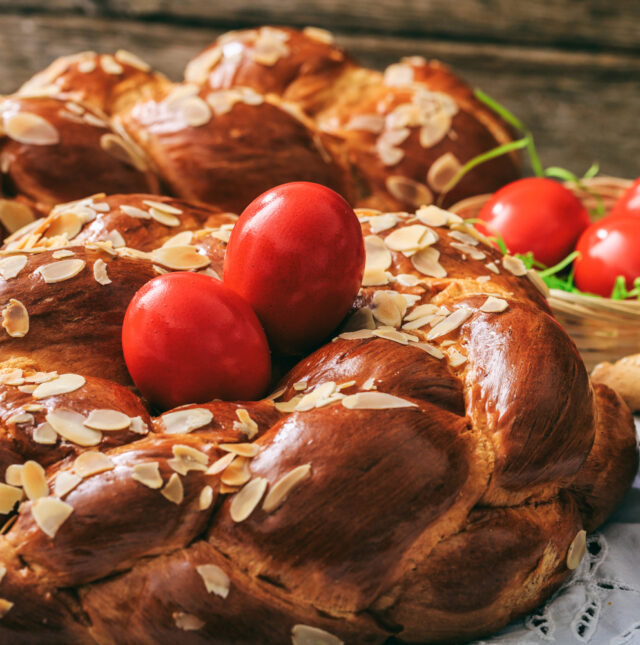 If you’re in Greece around Easter, keep an eye out for the braided bread with bright red easter eggs baked into it. The red of the eggs represent the eternal life experience for Orthodox Christian believers after death and is very eye-catching. The bread is flavored with orange and mahlab, which is an unusual spice made from ground cherry pits. 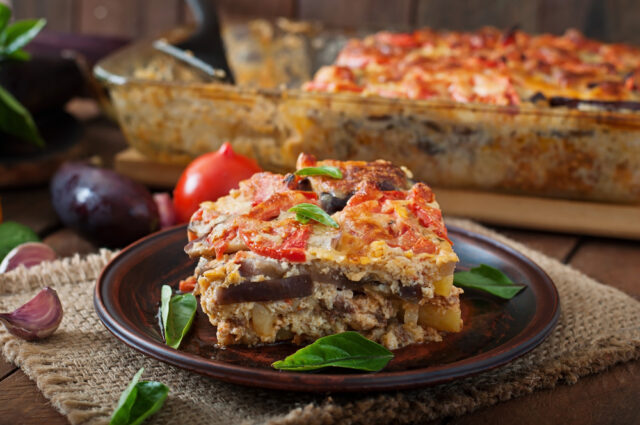 Served up in every taverna in Greece, this traditional dish consists of layers of minced beef, tomato sauce, sliced eggplant, and bechamel sauce. This dish is pretty heavy and very filling! So usually sides aren’t needed and would be overlooked anyway with this slice of savory heaven sitting on the table. Variations on this well-known dish range all over Greece, with potatoes, onions, cinnamon, allspice, and various cheeses making appearances in many of the dishes. Of course, a restaurant is an easy place to find moussaka, but the dish is so entwined with local life, many say the best moussaka is homemade. 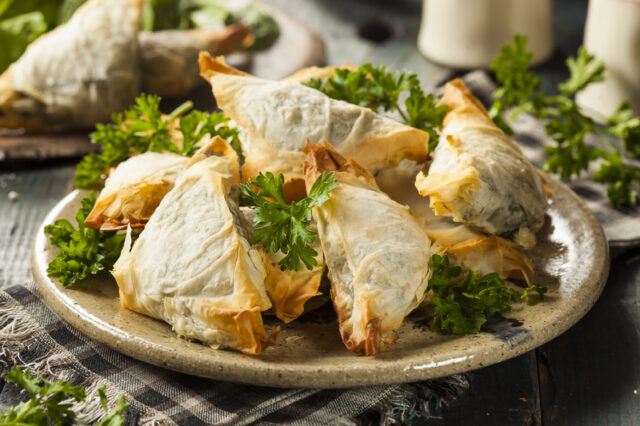 This simple yet delicious staple makes its way onto the table for breakfast, lunch, dinner, dessert, or just for a snack. Spanikopita is made up of spinach, feta cheese, butter, and olive oil, all packed into a triangle-shaped phyllo pie. Baked to golden perfection, it’s an easy favorite. A very similar dish is tiropita, which is the same as spanikopita but without the spinach. These smaller, cheesy triangles make for an excellent appetizer or side dish for a meal. 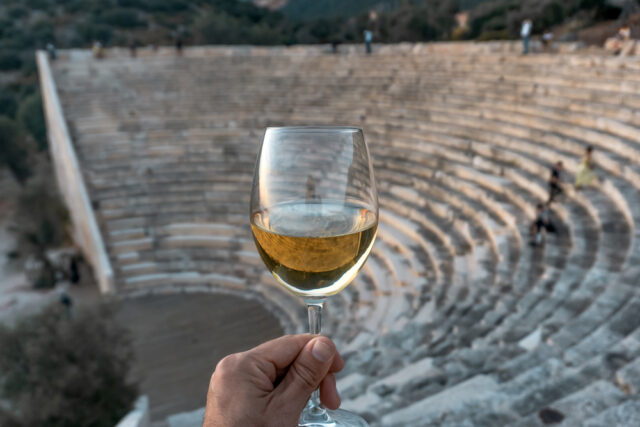 While indulging in many of the foods and tasty treats found in Greece, you’ll need something to wash it all down with! While the powerful ouzo is fun in small doses, sipping on a glass of Greek Retsina Wine adds a special feeling to the meal. This wine traces back over 2,000 years and is sealed with pine resin, adding an unusual but lovely flavor to the wine. It blends wonderfully with the popular spices of the region, mint, rosemary, and dill. 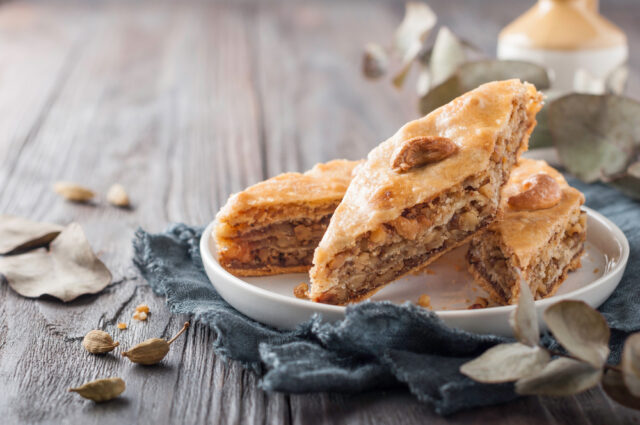 Among the most popular Greek desserts is baklava, and it’s certainly earned its place. Buttery, flaky phyllo dough wraps neatly around a honey-sweetened filling loaded with pistachios, spices like cinnamon and cardamom, and a little brown sugar and butter to taste. This dessert is also found in Turkey and the Middle East, but only Greece has pistachios in their baklava. Everything from almonds to walnuts (even pistachios) are used instead in other countries.

Perhaps I’m a bit biased as I grew up with these delicious foods. So aside from becoming friends with a Greek or purchasing them from a Greek restaurant or bakery, consider a trip to Greece. Check out our Ingenious Greece trip here. I’d love for you to join us!