Today we decided to start with the Grey Line Seattle Sightseeing Hop-On-Hop-Off City Tour. These tours are a great way to become familiar with a city by taking a guided tour that supplies you with history and allows flexibility for exploring the sights.

While on the tour, our guide pointed out several notable locations between stops. One of the most noteworthy was the Edgewater Hotel, built on Pier 67. It was originally constructed for the World’s Fair in 1962, but wasn’t completed until five days after the fair ended. It has a unique history nonetheless. The design of this hotel is quite distinctive, as it was built on and in such a way guests could fish from their hotel room windows. Over the years many famous musicians have stayed at this hotel, from The Beatles to Led Zeppelin. In fact a famous photograph of the Beatles was taken here as they fished from their hotel room window. 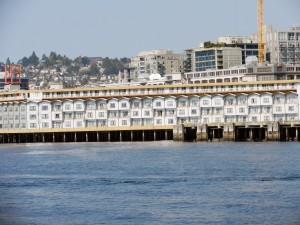 Our first stop of the day was Pike Place Market. It’s home to over 200 commercial businesses, from bakeries to restaurants and has been in operation now for over 100 years. It’s even home to the original Starbucks, hence the name of their Pikes Place coffee. 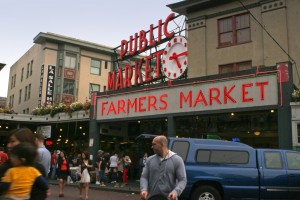 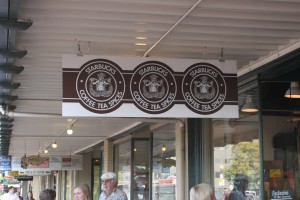 Looking for fresh produce or a fresh bouquet of flowers, this is the place for you. And if sea food is your thing, there are a plethora of vendors to choose from; some even put on a small production with the sale of each fish. (Check out the Pike Place Fish Co.) The market is loved by both locals and visitors alike, attracting approximately 10 million visitors a year and a must see in Seattle. 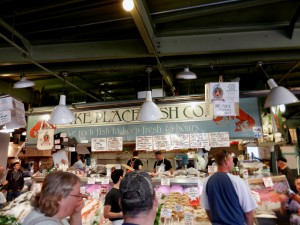 Our second stop was Pioneer Square, the oldest section of Seattle and home to the city’s oldest bar, The Central Saloon. There is much to do in this part of town as well with many unique restaurants and shops (check out Utilikilts) lining the streets. One also finds a number of sightseeing tours in this area, too such as The Underground Tour and the Spooked in Seattle Tour. 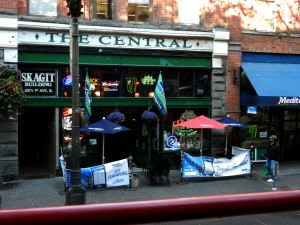 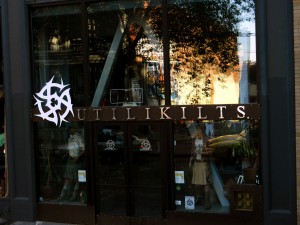 Our main focus in Pioneer Square was to explore a few used bookstores in the area.  Our fist top, Seattle Mystery Bookshop, this store has a great mix of both new and used mystery novels to choose from and the staff is friendly and very knowledgeable of all things mystery, crime or thrillers. Next we explored Wessel & Lieberman Booksellers, this store specializes in rare, hard to find and out of print books, but don’t let that stop you from venturing in. They do have a good selection of newer books, too.

Our final stop of the day was the Downtown Shopping District. Here you will find many conventional stores, including the very first Nordstrom’s department store and an old theater converted into a Banana Republic.

While you are in this area make sure to visit Westlake Park public plaza. This plaza is surrounded by shops on one side and a Westlake Center all on the other, but its best known for its buzz of activity. If there is any reason for public awareness or a political protest this is the place to be and it’s where we saw the one year Occupy movement march assemble. 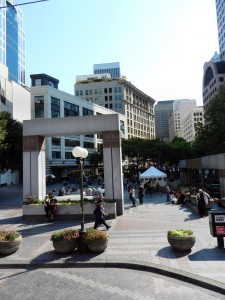 Directly across from this plaza one can visit the most expensive Starbucks store in the world, purchased for its prime location for media coverage due to all of the political activity nearby.  Did you know, there are 192 Starbucks in the downtown area of Seattle alone! 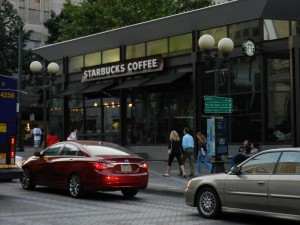 The most expensive Starbucks. Curious…ask me why!

Want to experience some of the sights mentioned throughout the blog series on Seattle? Contact Ingenious Travel today to book your long weekend!